This postcard of a Ukiyo-e painting, which is a traditional Japanese form of art came from Sady. The word ukiyo  means “floating world” and the art form was very popular between the 17th and 19th century. Particularly during the Edo-period between 1603 and 1867. Ukiyo was the first Japanese art that was specifically intended for the common folk of the country. All forms of art prior to ukiyo were luxury items for the aristocracy and the ruling classes. Now, I think this is where I need to stop writing about art before I injure myself. But thank you Sady!

This great postcard in the form of a wind chime comes from Heather in Japan. Wind Chimes in Eastern cultures serve several purposes. To frighten away birds, to keep away any evil spirits that might be lurking around, for good luck and as part of Feng Shui. The music probably plays a role as well, but I have to say that my annoyed-self does not deal with the constant chiming in months like August. The rest of the time, I could probably deal with it. At any rate, love them or hate them, I love this postcard!

This postcard, the second from Sady, comes all the way from Japan. It quite brilliantly displays the Japanese yakimono form of art. This old form of art dates back to the Neolithic period. Sady tells me, however, that this particular pot is in the Kyushu National Museum and was made during the 17th century, so it’s not quite that old. The art form suffered after the 18th century but thanks to the folk movement, interest in the art form flamed up again as of the 1920s. Very interesting indeed. Thank you Sady! 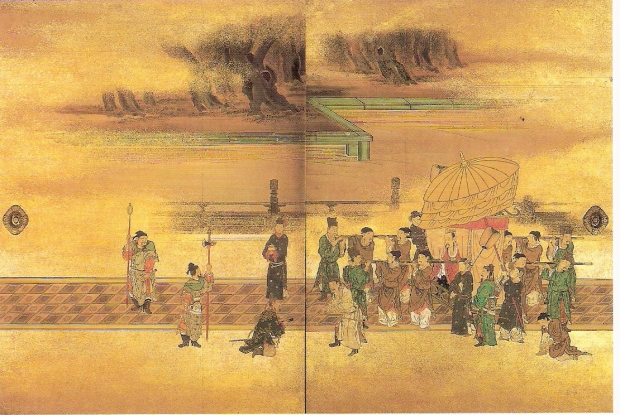 This delightfully traditional Japanese painting comes to me all the way from Sady. She tells me that she bought this postcard in Kyoto, while at a conference there. It is of the Kyoto Imperial Palace and chronicles an imperial visit. The Imperial Palace in Kyoto served as the residence of the ruling dynasty from the 12th century, all the way until 1869, when it was moved to Tokyo. Today the grounds of the palace are open to the public and tours are done frequently by the Imperial Household Agency. This is a country with the most beautiful of ancient cultures. Japan also deserves a visit from me, I think. Thank you Sady, I love this postcard!