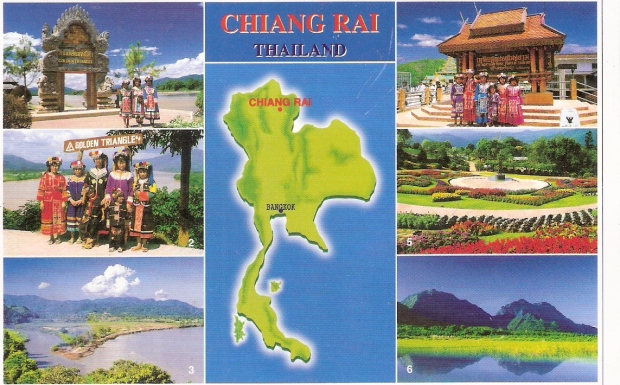 This beautiful postcard of Chiang Rai comes from Anna-Mae in Thailand. The city of Chiang Rai is located in Northern Thailand, as shown on the map. It was founded in 1262 by King Mangrai and was subsequently annexed by Burma. It remained under its control until 1786 and was once again annexed by Thailand (then Siam) in 1899. The city has a population of an estimated 200 000 people. The city (and region) clearly has many wonderful places to see. Thanks for a great postcard, Anna-Mae!

Now if that’s not the cutest thing I’ve ever seen. This awesome postcard comes to me from Weena in Thailand. The water buffalo is an animal that was domesticated over 4000 years ago in India. Two types of water buffalo are recognised, including the river buffalo and the swamp buffalo (above.) In Southeast Asia  the water buffalo is used to plow tile rice fields and are also used for their milk, which is richer in fat and protein than that of the dairy cow. It is estimated that there are up to 130 million domesticated water buffalo in the world and as a result of this sheer number, they have also become the animal that most people in the world depend on. Clearly this large animal is much more cuddly than the African buffalo, an animal I would never dare ride, let alone my child. Thank you Weena. I love the postcard!

I received this postcard from Mark, who is originally from England but has been living in Thailand for 10 years. This postcard is from Ayyuthaya, a UNESCO World Heritage Site and former capital of Thailand. According to the Buddhist calendar (When this was sent), it is now the year 2555, which means the buddhists have been laughing at the Mayans’ “2012” since 1469. Mark ends off the postcard with the words “May the force be with you”. Now I must beg the question, do buddhists actually say that to each other or was that just a quote from Star Wars? Can somebody that knows please enlighten me?