This great postcard of the Kretzulescu Church in the capital of Romania, Bucharest, comes from Danut. The church was commissioned between 1720 and 1722 by the boyar, Iordache Cretulescu and his wife, Sofia. It was originally painted but ever since it was restored, between 1935 and 1936, it has not been painted. The church was damaged during earthquakes in the city in 1940 and again in 1977 but was luckily restored. After the revolution in 1989, it once again had to be renovated. And to think, this beauty was slated for demolition when the communist regime came to power. Luckily they did not demolish it, otherwise I would not have had this beautiful postcard and Romania would have lost an amazing part of history! 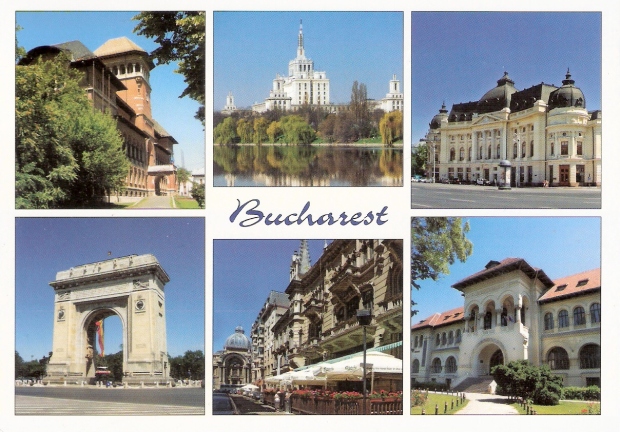 From Magdalena in the Romanian capital of Bucharest, I received this pretty multi-view and my first postcard from Romania. The 6 places to be seen on this postcard look great but the smart people who printed the postcard, did not take into account that maybe the receiver of this postcard would not be able to speak any Romanian. So, I would like to point out the arch at the bottom left, firstly. Looks familiar, doesn’t it? Well, you be wrong if you called it the Arc de Triomphe because this one goes by the very original name of Arcul de Triumf. The others that I could make out is the top right one that is the Central University Library (or something or other.) At the bottom far right is the Geology Museum (I think.) The one in the middle at the bottom seems to be a restaurant. Thank you for the pretty postcard Magdalena! Thank you for not letting the foreigner understand your postcard 2S Design!